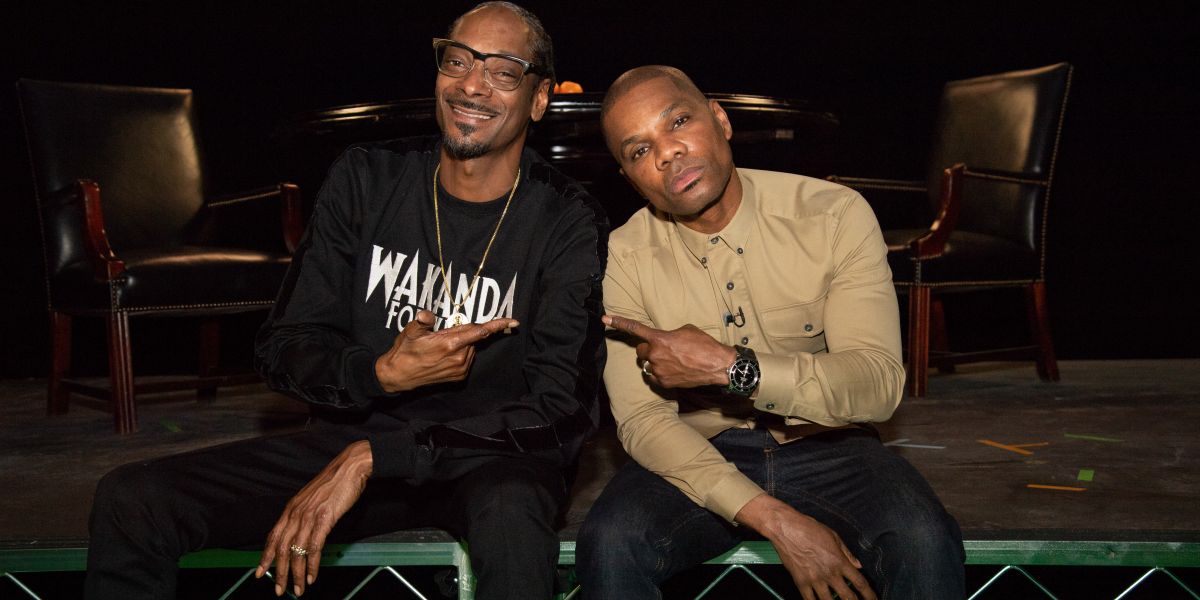 When West Coast rap legend Snoop Dogg announced back in January that he was cooking up a gospel album, Bible of Love, fans went scratching away at their hip-hop heads. The idea of him meshing his gangsta rap faculty with the church’s holy sound was understandably far-fetched to some degree. That’s until Uncle Snoop graced the No. 1 seat on Billboard’s Top Gospel Albums chart for six weeks straight upon the album’s March 16 release. Featuring the genre’s most treasured voices, Snoop rounded up legendary talents including Fred Hammond, Patti LaBelle, Tye Tribbett, Charlie Wilson and more for one of hip-hop and gospel’s most gloriously avant-garde efforts.

It all comes full circle with Snoop’s latest move toward the faith: From Gangster To Gospel To Redemption, a fresh three-part YouTube series with the Reigning King of Urban Gospel, Kirk Franklin.

In Episode 1 of the new hip-hop-gospel collaborative venture, Kirk and Snoop talk all things spirituality, faith and its grace on unholier moments from their respective pasts. He recalled the first time he ever met Snoop Doggy Dogg backstage at BET’s Soul Train Awards. As they delve into the conversation, Snoop dropped a gem on Kirk about gangsta rap’s birth from gospel music.

“95 percent of the gangster rappers were born and raised in a church, and the first style of music that they heard or were introduced to was church music—was gospel music,” he informed. “That’s their upbringing. That’s why you notice when every gangsta rapper wins an award, what’s the first thing they say?” The Long Beach-native added that Baptist churches came a dime a dozen on the West Coast, and it taught most gangsta rappers the majority of the skills they’d hang onto in their professional rap careers, like reading, acting, and performing. Ironically, Kirk shared that, despite growing up in the church, his influence was born from hip-hop. He named Digable Planets, Eric B. & Rakim, Big Daddy Kane and Geto Boys as some of his favorites. In a hilarious moment from their conversation, he even remembered copping Snoop’s Doggystyle album of 1993 with the bawdy cover artwork.

As the conversation continues to unfold, Snoop dug back to some of his earliest and most memorable moments in the church as well, such as catching the Holy Ghost for the first time. In that moment, he expressed to Kirk, he knew God was convicting him to do more right than wrong, and to take Him, along with his faith, to every destination he’d encounter in life—right, wrong, or indifferent. “So when I did decide to make wrong decisions, and join a gang, and sell drugs, I had God right there with me,” he said.

Kirk also rewound back to a momentous encounter when he realized Snoop’s faith. The year was 1998, and Snoop nudged him about collaborating on some music together, a request that left Kirk shooketh. “I was scared to death,” he recalled. “Because, I know on the West Coast, y’all were coming out of that whole Death Row movement, and it was still fresh, it was still new. And it scared me to death because it was so real.” But even back then, Kirk praised, he could feel Snoop’s humility and passion.

It was the same humility and passion that led Snoop out of a sticky situation with his gang, which he shared with the “Brighter Day” gospel artist. He recalled a request from the men to do act against his better judgement. “They wanted me to do something violent to somebody,” he said. “And I just couldn’t do it.” The usual protocol for declining a demand was disciplinary action. But in a twist Snoop himself didn’t expect, they allowed him to walk scot free and take on his music career. “Because it’s like, they must have seen what I seen, and I really wasn’t cut out for that.” On the contrary, Kirk believes that their reason for releasing him so peacefully was due to another plan. “Or, they could have seen God’s hand on your life even then,” he responded.

Elsewhere in the interview, the men discuss the power of prayer, Kirk’s humble beginnings as a parentless child adopted by a 64-year-old woman with a 4th grade education, and his struggle with women and promiscuity. Wrapping up part one, Snoop even through down some holy bars over Kirk’s hilarious “cafeteria beat” for praiseworthy gospel freestyle.

See the first installation of From Gangster To Gospel To Redemption below and stay tuned for Episode 2 on BET.com.