Things Your Man Won’t Do: The Stage Play 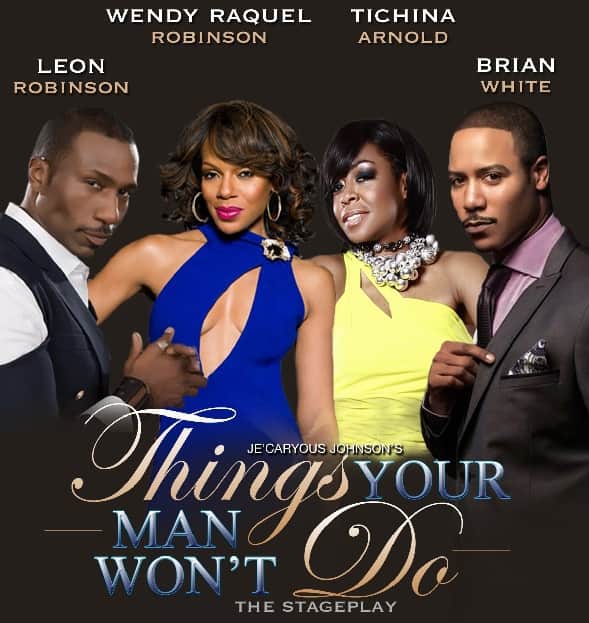 And every woman gushed and imagined what that would be like. Now award winning writer/director/ producer Je’Caryous Johnson will bring that fantasy to reality with his hit stage play “Things Your Man Won’t Do” starring Tichnia Arnold, Wendy Raquel Robinson, Leon Robinson andBrian White.

“In Je’Caryous Johnson’s “Things Your Man Won’t Do”,  audiences meet Rachel Braxton, who most men would view as the perfect woman. Rachel prayed and prayed after a very tumultuous relationship for the perfect man and God sent her Demetrius McAlister. But, years later, through all the dates and after finally deciding to move in together, Demetrius still won’t commit, at least to marriage that is. Rachel tries to figure out if she will continue to be comfortable with her relationship as it stands or whether she will allow another man from her past to step right into Demetrius’ shoes, doing all the things he won’t. The high jinx antics and non-stop battle of the sexes drama makes this a must see.” – Linda Stewart It’s Done Communications

The play is set to make it’s way to Chicago this weekend for 3 shows only!Friday, March 13th at 8PM and Saturday, March 14th at 3PM and 8PMlocated at the Arie Crown Theater. Ticket prices range from $29.50-$49.50 and can be purchased at the Arie Crown box office or by calling 800-745-3000 or online at Ticketmaster.com